Congratulations to Stephen Bassett who’s been awarded a Gold medal in a salon (1st DPW ANNUAL EXHIBITION 2014) for ‘Ella’s Eyes’: 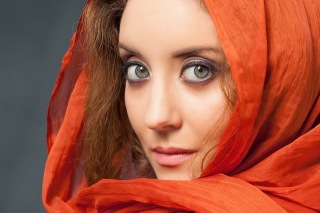 I have to say I don’t think my eyes have received a medal before, so that’s nice. 🙂
I also like the one below. Both were taken at Catchlight Studios in Belfast.

In other ‘things I’ve been tagged in on facebook’ news, the incredible photographer Neil Snape, who I worked with in Paris plucked this image out of the ether and wrote the following very very touching note:

‘Funny Ella Rose Muse said when shooting, she didn’t think she’d fit into my style of shooting. In the way that must be because I had only one chance to shoot with you , the most romantic painterly Raphealesque model one could ever find…. I think I’ll have to remove this one quickly even though it shows nothing but beauty, unfortunately.’

… It’s true, I do remember saying I was surprised (and flattered) that he was so enthusiastic to shoot with me, despite being more usually working with supermodels and fashion advertising. It was a pleasant surprise that someone whose commercial clients include ‘Helena Rubenstein, Sonia Rykiel, YSL Beauté, Lanvin, Cartier, Lalique, Leonard, L’Oreal, and LMVH’ was so keen to work with my look and genuinely appreciative of it.

Actually, I think I’m due a visit to both Paris and Belfast again soon. Hhmm.

I hope you’re all as embarrassingly excited as I am about Downton Abbey’s new series starting this evening… Keep your eyes out for an appearance from me in a couple of scenes (though I have no idea which episode I’ll be in!).

P.S. Have you been following me on instagram? I’m posting behind the scenes and other such nonsense on there… and I promise it’s not ALL about my dog, despite the fact that she looks like this: 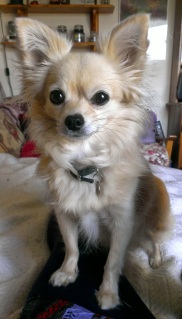 (Sometimes it’s also about my cat.)