Hi everyone. I’m back from a hugely productive trip to the incredibly visually eye-mazing country that is Switzerland (images and video to come!), and raring to update this little portion of the internet.

As part of my trip to Scotland last month, I worked with GDelargy Photography. The plan was that he would pick me up at a point in the Highlands where I’d just finished shooting and drop me off at my accommodation in Glasgow that evening, shooting along the way! What a clever idea, making the best possible use of travel time between locations by shooting at all the beauty hotspots along the way! Scotland, of course, has more than its fair share of picturesque scenes…

…Unfortunately, the amazing weather I’d experienced at the beginning of the trip took a little turn for the worse, and we were quite limited in what we could do, even with my newly-bought pink polka dot wellies from a Highland cornershop.

Still, it was a wonderful drive. G was great company. Glen Coe was beautiful despite pouring rain. We stopped at one location for a possible shoot but the wind was so severe it just wasn’t going to happen. Fortunately, G had a couple more places up his sleeve. One was an area of the most exquisite, fiery orange-coloured heather. (I’m calling it heather; it might have been something else.) I squelched my way across the boggy ground, found the most colourful part and lay down in it. 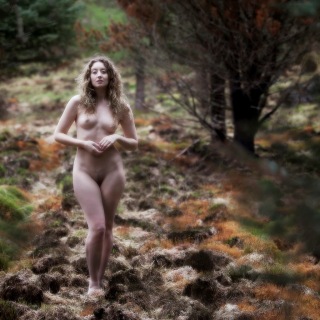 Later, we politely ignored the ‘danger, slippery rocks!’ signs to get these shots at the Falls of Orchy. I love the strong levels of contrast in these images (I’ve got such a thing for rich blacks), and my pale skin really pings out of them. Several quick poses here, but I think the first is my favourite. We got to Glasgow late after a quick stop for pizza at Dominoes. I suppose I don’t eat there often as I apparently broke normal pizza-buying ettiquette by enquiring about the herbs (i.e. do they count as one of the toppings, since they are listed? What are they?). I started requesting basil and oregano, and was met with a baffled look. Apparently, herbs are just herbs. All the herbs in the world ever go on the pizza, maybe. Fine. It tasted good.

I’d like to get on with arranging a second trip to Scotland for this year as there were a few people whose dates I couldn’t match up with, and am considering another (briefer) visit, but am left pondering my diary heavily, wishing I could insert a month or two between August and September. Wouldn’t that be amazing?

2 thoughts on “Fires and Falls”