All has been a bit dramatic here over the last couple of days. Those of you who have ‘friended’ me on facebook will know by now that I had a bit of a strange episode in the early hours of yesterday morning, walking into the bathroom and collapsing to the floor. I have no idea why this happened, really; yes I’ve been  ‘under the weather’ for a while now, with what was flu turning into just the usual symptoms associated with a cold – feeling a bit lacking in energy and tired, with a cough that seemed like it would never go away (still hasn’t). To be honest I was ignoring it a bit, just taking it a bit easier than usual in terms of accepting bookings, but my body obviously decided to have a bit of a sulk about it and treat me to my first experience of fainting.

I now have a cut, swollen lip, bruises on my chin (I basically landed on my face, I assume; my front tooth hurt a lot yesterday, though thankfully it didn’t get chipped or anything) and a touch of concussion to top it all off. The doctor took my pulse and blood pressure about seven times, frowning worryingly each time – my heart was racing, and my head was kind of lolling about while I sat in the chair. I also mentioned to her that I’d been vaguely aware of bumping my head against something more than once, as though I had been moving about on the floor (and also we found blood in two different parts of the bathroom floor), but she assured me that moving around is still consistent with a faint and not something to worry about at all (and I’m not really sure what happened anyway). I’m still feeling quite dizzy, strange and sorry for myself, but hopefully the actual faint was just a one off – though apparently it isn’t uncommon early in the morning, especially in young women, so various factors probably just came together. Still feels very bizarre and ‘out of the blue’ though.

I think I’m going to just lie down and read The English Patient for the rest of the day.

Also, the swollen-on-one-side lip has given me the opportunity to be surprised by the fact that, actually, massive lips wouldn’t particularly suit me. I’ll stick with my own please.

On a much brighter note, I’ve recently updated my Model Mayhem page and my purpleport page including one of these images taken by Jim Baab. 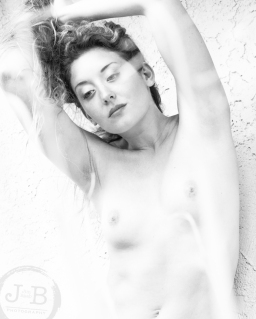 (The set above, with the cactus in the foreground, came out really prettily in colour too.)